FX Industry Trends for 2023 and Beyond 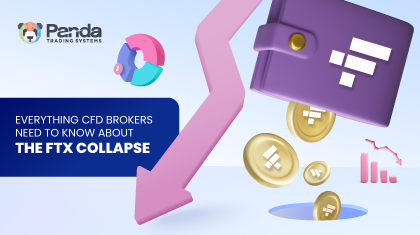 Everything CFD Brokers Need to Know About the FTX Collapse 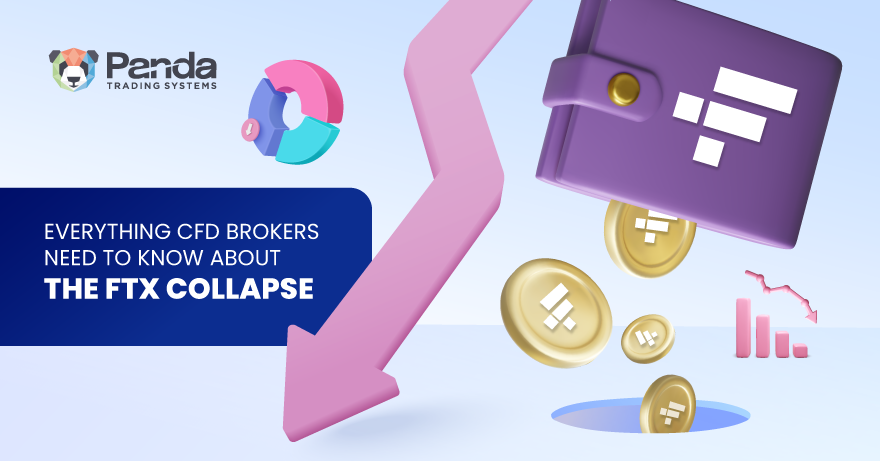 During the last crypto bull market, FTX, a Bahamian-based crypto exchange with US ties emerged, seemingly out of nowhere, to become one of the biggest crypto players in the world. Traders, both retail and institutional, flocked to it because it offered all the newest, most speculative tokens, as well as highly leveraged derivative products. The business was founded by a wunderkind in his late twenties by the name of Sam Bankman-Fried, who would go from relative obscurity to becoming a billionaire in just four short years.

FTX spent hundreds of millions of dollars to plaster its name everywhere, as well as getting A-list celebrities such as Tom Brady, Gisele Bundchen, and Larry David to provide endorsements. In March of 2021, FTX acquired the naming rights of the former American Airlines Arena in Miami, changing it to FTX Area, for $135 million. The exchange also launched its own crypto token, FTT, which offered holders perks for trading on the exchange.  FTT topped-out in September of 2021 at about $80 per token, with a market cap just over $9.6 billion.

Bankman-Fried was also behind another entity named Alameda Research. Founded two years before FTX, Alameda was a trading firm that specialized in crypto, and made its money through market making, arbitrage, and yield farming activities. The CEO of Alameda Research, Caroline Ellison, is said to have been romantically involved with Sam Bankman-Fried. As the details of the spectacular collapse of FTX emerge, it appears that Alameda research was as intimately connected to FTX as the CEOs of the two companies were, using the client funds of FTX to make highly risky speculative bets, and being exempt from liquidation rules that governed the trading activities of other FTX traders on the exchange. Another important part of this story is that Alameda was using FTT tokens, which were created and controlled by FTX, as collateral for loans in USD stablecoins, another distinct no-no in the business.

The house of cards started to topple when on November 2, 2022, an article from Coindesk threw Alameda’s balance sheet into question. Several days later, on November 6, the CEO of rival exchange Binance, Changpeng Zhao (known in the industry as CZ), tweeted that Binance, which was an early investor in FTX, would be liquidating all the FTT tokens it held on its books. Two days later on November 8, FTX would halt withdrawals from the exchange as users flocked to get their crypto off the exchange. In the following days, it appeared that Binance would be acquiring the now bankrupt FTX, but then backed out when CZ became aware of the extent of the hole in FTX’s balance sheet. The event has sent crypto markets in a downward spiral, with even unaffected projects bleeding out as the entire market tanks.

The short answer to this question is, ultimately, no. This wasn’t a failure of crypto itself, as much as it was crypto being used for a broader fraud and investors looking the other way, failing to perform due diligence as long as the price kept going up.

The longer answer to the question is that crypto is on life support now, and could be on a ventilator for a good few years to come. Bitcoin, at the time of writing, is trading at around $16500, which is actually below the 2017 cycle high of $20k. You never see this occurring, usually the bitcoin price never gets anywhere near its previous cycle high in the subsequent cycle’s bear market low. In 2013 it topped-out at around $1200, in 2017 it topped out at $20k, but only went as low as $3k in the bear market that followed. Even the Covid-crash failed to take it lower than $4k. What we’re seeing now is a profound lack of confidence in the space and a rush to get out as affected parties scramble to get their hands on as much cash as possible and fearful investors run for the exits.

What happens next depends entirely on just how many businesses were exposed to FTX, and how deep the contagion from its failure runs. It is now rumored that Gemini, a prominent US exchange and crypto custodian favored by institutional players may also be insolvent.

Also, keep in mind that crypto really pushed into the mainstream consciousness in the post-Covid bull run (in no small part due to the flashy marketing efforts of FTX). Now all of that awareness, trust and good will is gone. Investors were already hurting from the bear market experienced throughout 2022, and you really have to think of this FTX situation as the capitulation moment, where people give up, cut their losses, and vow to be good little boys and girls next time and never to touch crypto again. For the institutions this is even worse. The previous bull market of 2017 was primarily a retail phenomenon. It took many years of building on-ramps to convince institutions that crypto was a legitimate asset class.

Which is to say nothing of the regulatory backlash that will undoubtedly follow such a high-profile failure. This is by far crypto’s largest ever collapse and touches so many different areas. Sam Bankman-Fried was also the second largest donor to the US Democratic party, after George Soros. That should put things into context. So, not only are things due to get worse from the financial contagion of this event, but the regulators are also likely to make life much harder for crypto businesses.

Not your keys, not your coins

Record numbers of cryptocurrency tokens are now in the process of being taken off exchanges and stored in self-custody wallets by users. This is part of the “not your keys, not your coins” movement that many older crypto heads recall following the catastrophic failure of the first cryptocurrency exchange, MTGox, back in 2014. The idea being that it’s not really your crypto if you’re holding it on an exchange. People rarely learn from the mistakes of the past, and so now a new generation of crypto enthusiasts are discovering the importance of controlling the private keys to their own crypto assets, rather than outsourcing this responsibility to exchanges.

What all this means for CFD brokers

Much of this news plays into the hands of CFD brokers in a number of important ways. Firstly, it means that one of the largest online trading rivals for CFD brokers has taken an enormous hit in public confidence.

It also demonstrates, quite emphatically, that while crypto exchanges may have become experts in how to manage the spot trading of crypto assets and the custody thereof, they’re clearly not as well equipped to manage the risk associated with running leveraged derivatives on top of those spot markets, or even the ability to efficiently short them.

After all, one of the main reasons for the popularity of FTX is that it offered the kinds of leveraged derivatives that traders seek out, but that the exchanges based in stricter jurisdictions couldn’t offer to their customers. CFD brokers, on the other hand, are experts in this particular field, and have managed to thread the needle throughout the past decades when it comes to regulatory oversight, insured deposits, as well as being able to offer the riskier types of bets that a certain contingent of traders favor. They’ve done so throughout crisis after crisis, from the GFC and European sovereign debt crisis, through the SNB event, all the way to the pandemic everything-crash and beyond. All of this ought to be made clear to the trading public before some other upstart like FTX emerges next time to soak up all of these potential volumes.

It seems likely that the next time crypto experiences a bull market, and make no mistake it will (the next bitcoin halving is due in the first half of 2024), there will probably be a far clearer division between the holding of crypto as a asset that you can purchase and then take custody of by withdrawing it from the exchange you purchased it from, and the more speculative trading of crypto, which doesn’t ever require taking possession of it because traders favour taking their profits in fiat currency. The first kind is not a game most CFD brokers want, or indeed need, to get into. But the “not your keys, not your coins” movement actually helps CFD brokers because it draws a clearer line in the sand between holders of crypto and that second group of traders who only want to speculate on the price moves. This could provide a massive source of volumes for CFD brokers if they get their acts together and find a way to appeal to this crowd by offering the assets that they seek to speculate on.

For our part, we at Panda will be here, improving our products, sharing our insights with industry participants, and building the backbone of the types of trading services our brokers will be offering in the years to come.