The Growing Importance of A.I in Online Brokerage 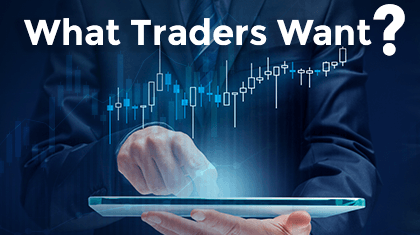 As part of our ongoing commitment to making online trading better for all concerned, we regularly put feelers out to our clients and conduct anonymous surveys of the space. We do this so that we can ensure that we’ve always got our finger on the pulse of this exciting and ever-changing market. In the following two-part series, we’d like to share some of the insights we’ve gained by doing this. Below we’ll focus on the end trader, and in part 2 we’ll share what your competitors have expressed as their main pain points.

Most clients are day traders
There appears to be a bit of a disconnect between how most online brokerages present themselves to the public, and what the overwhelming majority of traders actually use them for. When asking survey respondents how often they trade, we were shocked to find that almost 70% reported that they trade at least once a day. What this means, is that any initiatives, discounts, promotions, benefits or rebates that you gear towards higher frequency traders are bound to be better received than the energies you’re spending on promoting FX/CFD trading as some kind of longer-term investment vehicle. This is a speculators market, so make sure that you focus on making the experience as seamless and friction-free for this type of trader.

MT4 is still top notch
MetaQuotes achieved something very special with the first and best-known version of their popular line of trading platforms. For whatever reason, despite MT4 being the older platform in the parent company’s line, has found a special place in the hearts and minds of traders. In the hundreds of responses we received when asking what the platform of choice was for traders, what we got back was a sea of MT4 with a few islands of MT5, and a number of other broker-specific platforms. This is also borne out by the Google Trends data that still has MT4 as most searched for among its peers by a significant margin. What this tells you as a broker, is that not only should you be hitting that all-important keyword in your online content, but that you should be offering an experience that comes as close to it as possible.

B-book is back
Many of you will recall that about a decade ago, A-book execution became all the rage. The idea being that traders placed more trust in brokers that acted as middlemen between their trades and the liquidity providers, rather than internalising these trades and keeping them on their own books. Then, the Swiss National Bank removed its currency’s peg to the euro and many prominent names in the industry found themselves going out of business off the back of one bad trade. In our surveys, we found that almost 50% of respondents prefer b-book over a-book at around 30%, with those reporting no preference or not understanding the difference accounting for the rest. What this reveals, is that the majority of traders simply want exposure to markets from a source that can be trusted. The method, or how far removed they are from the “real” market is not as significant to them as the ability to get in and out of positions in a timely, reliable and cost-effective fashion. We saw this recently with the GameStop/Robinhood debacle. While better-established brokers with more liquidity and higher operating capital fared better when LPs raised margin requirements, those who manage risk internally were in a position to face no disruption at all.

FX is still king
When asking traders about the assets they’re most interested in, we found some interesting trends. Despite the push towards multi-asset brokerage in the past decade or so, FX is still number 1. It was twice as popular as the second most popular asset, which was precious metals, with indices and energy coming in at a close third and fourth place, respectively. This goes to show that not much has changed in the asset front over the past few years, and that crypto has barely made a dent in the FX/CFD market, despite its explosion in popularity elsewhere. Of course, this could have a lot to do with how CFD brokers are selecting and marketing their crypto offerings (you can learn more about this here).

Regulation, regulation, regulation
Finally, when asked what was most important in their choice of trading with one broker over another, respondents were very clear. The single most important criterion in choosing where to trade was firstly whether the brokerage in question was regulated and where. Closely related and in second place came the brokerage’s reputation among the wider trading community, and third was how competitive the available spreads. This may be a surprise for many of you, who probably think that spreads ought to be the most important deciding factor. It was close, but the traders have indeed spoken.

For more information on how to leverage these insights in your own brokerage business, for guidance on how to gain regulation in a reputable jurisdiction, and to learn about Panda’s own industry-leading MT4 offering, please get in touch with one of our success managers.

Join us in part 2, where we’ll be looking at what your competitors have been saying!