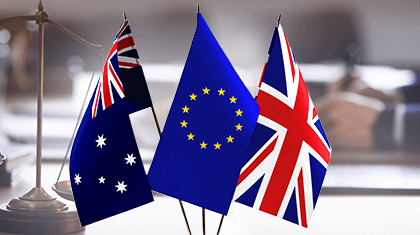 In the following two-part series, we’ll be focusing on regulation. In our role as a technology provider to new and existing brokerages, one of the most common questions that arises has to do with the regulatory landscape. Fear not, though, it’s not as stressful, or confusing as it may seem on the surface. In part 1, we’ll be looking at the UK, EU and Australia, which over the years have become some of the more stringent and well-regarded regulatory jurisdictions in the online CFD space.

The decision as to whether to seek regulation in the UK, EU or Australia, will, of course, depend on your target market. Within the EU, a single regulatory license from any EU member nation will allow a brokerage to passport its services throughout the European Union. Until recently, this also held true for the UK, but with Brexit on the horizon this is likely to change soon. Below you’ll find a table with the main costs, taxation schemes and lead times required to gain a licence in the UK, Australia, and in several of Europe’s more popular regulatory regimes.

Keep in mind that the capitalisation requirements (statutory capital) outlined below vary between 50k, 125k and 730k depending on whether the brokerage in question is to be a white label, an STP broker, or a market maker. In the case of an Australian Financial Services License, there exists just one tier.

* The UK’s regulator is soon to be freed from its commitments to act in line with ESMA and, as such, these details could be due to change.

The United Kingdom boasts one of the most developed trading markets in the world. It has the highest number of active traders within the EU, and is also one of the more difficult markets to break into, with customer acquisition costs consistently amongst the highest in the industry. The UK’s Financial Conduct Authority (FCA) is very highly regarded, which is why many brokerages have historically opted to attain both EU and UK regulation, particularly when courting UK clients. Until now, the UK’s FCA has been under the European Securities and Markets Agency (ESMA). As such, the regulatory practices between the UK and the EU have been almost identical. This, however, may be due to change as the Brexit deadline approaches.

Within the European Union, ESMA sets the standards for all the individual national regulators of EU members. As mentioned above, a license in any of Europe’s many regulatory jurisdictions allows a brokerage to offer services to European citizens from any of its member states. The Cyprus Securities and Exchange Commission (CySEC) is one of the most popular of these, owing to the country’s combination of lower taxes, a highly skilled workforce and the relative ease of setting up a company. It has also been the European epicentre of the online FX/CFD industry, with many of the largest European brokers choosing to base themselves there. As you can see from the table above, Cyprus and Ireland are among the most competitive EU destinations to start a brokerage in.

Though newer to online trading than the other two, Australia’s regulator, the Australian Securities and Investments Commission (ASIC) has quickly developed into one of the most reputable jurisdictions in the APAC region. Initially, brokers began seeking an Australian Financial Services license (AFS) due to regulations becoming ever more strict in Europe. In recent years, ASIC has moved to put an end to regulatory arbitrage by harmonising its regulations with the FCA and ESMA. Last year ASIC published its CP322 consultation paper outlining proposed interventions in online brokerage space that were even stricter than either the FCA’s or ESMA’s. Following pressure from local brokers and concerns that its proposals would render Australia uncompetitive, it has now fallen in line with the FCA and ESMA, as you can see in the table below..

* Currently, the UK’s requirements have been identical to ESMA’s with the inclusion of “relevant sovereign debt” under these two categories. It is shortly to be freed from its commitments to act in line with ESMA and, as such, these could be due to change.

All three jurisdictions have banned Binary Options trading and the offering of bonuses, whether monetary or otherwise. They also all require brokers to offer negative balance protection. The main difference between them is that ASIC does not require brokers to state the percentage of clients who lose money in their advertising materials, like the FCA and ESMA currently do.

Join us in part 2, where we’ll be exploring some of the looser jurisdictions that many start-up brokerages choose to begin trading under.