How to Launch a Brokerage in Just 3 Weeks

Everything CFD Brokers Need to Know About the FTX Collapse 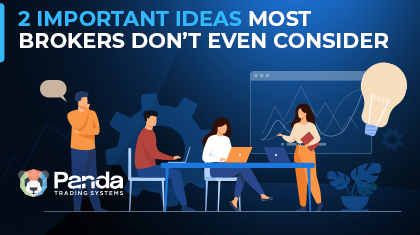 At Panda we love tech, but we also love helping brokers think about subtle changes that cost nothing but can contribute to long term growth. After all, the longer you’re around, the more chances there are that we’ll be working together! So, below you’ll find a couple of ideas that don’t get discussed very often in our industry, but that the top retail trading outfits seem to get right.

Allow Your People to Move Horizontally

In our experience, it’s highly probable that you have someone extraordinary working for you right now, who will probably end up doing something completely different and personally rewarding for another employer (or indeed themselves) at a later stage of their career. The reason they aren’t destined to do extraordinary things for you, is that you just can’t see them. They’re probably fresh out of college, eager to get on, stuck as a human resource statistic in an entry-level position somewhere.

They may have even been working for you for years. We’ve come across customer service managers who know every aspect of the brokerage they work for, every nook and cranny of the platforms, every intricacy of how orders are filled. They know these things because over the years they’ve had to deal with every kind of customer and every kind of complaint, and yet they don’t get invited to any of the important meetings unless the meetings are explicitly about CS. These people are the glue that holds your business together, because they know and can do more than just their own jobs.

At Panda, too, we’ve found developers in the unlikeliest corners of our own company just by taking the time to look and listen. Take it from us, the people in your business with a genuine curiosity about what you do, if encouraged, can grow well beyond their original stations.

The type of person we’re talking about here can be overlooked either because they’ve just started, or were initially hired for roles that don’t require certain qualifications. And yet, every successful business either has these people holding everything together without knowing about them (eventually losing them), or learns to actively nurture these kinds of employees.

Ultimately, the more you let people explore the different things they may be able to do for you, the more likely they are to find a better fit than the role their CV brought them in for. To say nothing of how such an approach is good for morale and leads to increased staff loyalty.

“These people are the glue that holds your business together, because they know and can do much more than just their own jobs.”

So, how do you create an environment that helps identify such people? A great way is to allow people in your organisation to move horizontally. There are two key reasons why this is a good tactic if you’re really serious about finding and keeping your homegrown talent.

Firstly, it exposes everyone who’s interested to all the different areas of your business. Right off the bat, by encouraging horizontal development you’ve identified the people who are curious enough to look beyond the relative comfort of their own positions. Think back to high school, most kids just want to know if it’s going to be on the test or not. People rarely want to learn anything more than what they absolutely need to get the job done, so it’s a good idea to be able to spot those who are intrigued and want to know more. Anything that helps identify the genuinely curious among your ranks can only be of value in the long run.

Secondly, it sets up a different dynamic within individual departments, especially the highly competitive ones like sales, because there’s the possibility of more than just one career path, so newbies with promise aren’t stifled and put in their place by team leaders and lower managers for fear of becoming future competition.

Find the Market Nerds, and Keep them Close

This point is an extension of the previous one in some ways, but it’s about a very specific subject that should be a priority for brokers. Ultimately, your business isn’t just about providing access to markets. It may have been 20 years ago, but today if your business can’t convince traders that you know what you’re talking about and that your people genuinely care about this stuff, then you’re only ever going to appeal to the same kind of novices who don’t know any better.

You probably have traders in your ranks, or avid market watchers, who have a better grasp of what’s going on in certain markets than even some of the people you’ve hired as general “experts,” or “analysts.” Markets are too big, there’s no such thing as an expert in everything. This is why, as an example, there were probably people in your company building bitcoin positions in their spare time back in 2015, before the asset class was even on your company’s radar. These things really happened, and sometimes an MBA, or a CFA, can mean sweet FA. So, if it’s markets you’re selling, look around and see if you’ve got people who are actually crazy about markets, regardless of what they’re currently doing for you.

“Sometimes an MBA, or a CFA, can mean sweet FA.”

People who really dig markets, and the intellectual struggle that comes with understanding them, are a precious commodity for brokers because they’re useful in so many ways. How

many salespeople do you have who talk the talk, but don’t care about or even really follow the markets they’re selling beyond next week’s NFP? A person who lives and breathes markets is always preferable on the phone than someone who doesn’t, be they sales, retention, or CS.

But there are other benefits too, these individuals are very useful when crafting your marketing messaging because they’re the only people in your company actually aware of what’s out there in terms of market access, as consumers. They’re probably not even trading with your company!

Internally too, these individuals can be invaluable when it comes to educating the rest of your staff, or new recruits. They can also be a useful radar on what assets the business should consider adding. They’re aware of market themes (and symbols to gain exposure to those themes) sometimes years before your business development team makes the same connections. A trader’s job is to get there before the crowd, ask yourself whether your business decisions are being informed by these types, or by the crowd. The introduction of CFDs on ETFs is another good example, coming as it did in our industry when the passive investing theme was actually relatively long in the tooth everywhere else.

There’s nothing like having a guy or girl in the office who’s obsessed with what the Federal Reserve is doing, for example, or how such-and-such is happening in the world of Canadian cannabis stocks. Everybody around them starts to be aware of and even strangely conversant in these topics. So, encourage the market nerds to come out of the woodwork, give them an opportunity to influence the decision-making process (or at least to be heard), and watch your business start to become more relevant, rather than trying to grasp what retail traders want from the outside-in.

Subtle changes in how your organisation views your talent and learns to leverage its unique strengths, can make a big overall difference to both the internal culture of your business, but also how it appears to the outside world. The hard truth is that these approaches are often difficult to implement in practice because they require equal doses of art and science, as well as a healthy dab of imagination.